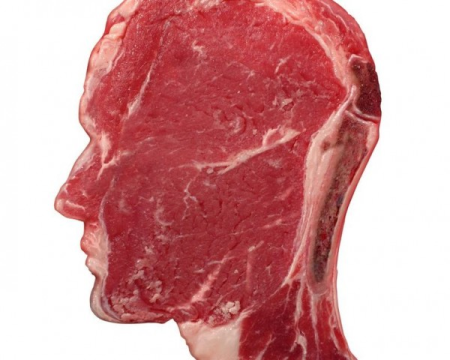 Legend has it that Eleanor of Aquitaine, bored with her marriage to King Louis the Seventh, sought adventure in the Holy Land by sneaking away to a local tavern where she met the Viking Erik the Black. Soon she was sailing off with him, leaving her old life behind. But what occurred between these two events—her initial meeting with Erik and the ensuing voyage—has been the subject of much conjecture.

How did Erik charm the spouse of one of the most powerful men in the world? The answer was reached in the early 20th century; an archeological discovery uncovered a small puppet stage and the bones of a quartet of tiny people, who wore comical garments and dancing slippers; according to DNA tests, their heads and necks were wrapped in the meat of camels, skunks and other indigenous creatures. Musical instruments were discovered in subsequent digs.

The consensus is that Erik ordered his diminutive minions to perform “La Danse des Viands”—in English, “The Meat Dance”—a traditional puppet show which, when performed correctly, has the full effect of a powerful aphrodisiac.

This incident is commemorated today in one of Pørtland’s most popular and enduring attractions: the Dancing Meat Puppets of Pioneer Square. Tourists from all over Cascadia enjoy the spectacle of classical ballets performed by tiny people bedecked in costumes that include plastic masks of sausages, chicken wings and (on special occasions) porterhouse steak.