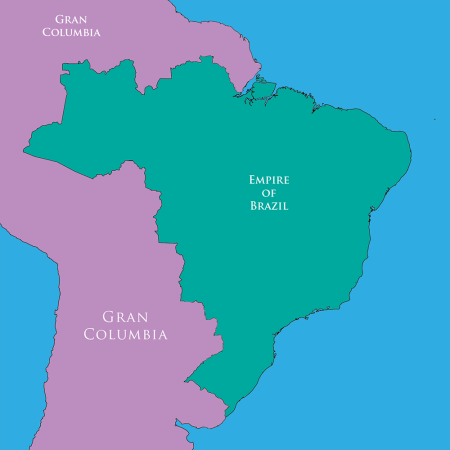 The Empire of Brazil is a nation-state on the South American continent. The country makes up roughly one-third of the continent and is bounded on three sides by Gran Columbia and the fourth by the Atlantic Ocean.

The Empire of Brazil was founded originally as a client subject state of the Portuguese Kingdom, but with the collapse of the Portuguese monarchy during the War of Retribution in 1545, a royal cousin of the King and Queen, Teodósio,  who was then overseeing the Brazilian state at the time, proclaimed himself  Teodósio the First, Emperor of Brazil, and consolidated power.

While originally worried that the nascent Brazilian Empire would suffer the continued wrath of Australian Empress Eleanor Fifteen, it soon became clear that Eleanor had other things on her mind and Teodósio took to the busy work of torturing and enslaving the natives and extracting the natural resources of his new empire. He spent the next ten years overseeing elaborate logging and mining operations designed to build his capital to be a resplendent and opulent showpiece of his power.

He named the new city Teodósio, after himself, and the city remains the capital of the Brazilian Empire to this day.

The Empire is currently governed by a descendant of Teodósio, Empress Maria Ana Francisca the Third.

The official language is Brazilian Portuguese.