Welcome to the Empire of Australia!

We, the citizens of the Empire of Australia, loyal subjects of the Empress, stand united as the world's global superpower. Out of chaos we aspire to peace, security, and prosperity.

Our founding principles are Seven, like the Seven points of the Empire star, and our inspriation is One, like Eleanor. We hold it to be self-evident that the natural state of humanity is bestial and that Empire is our civilizing grace. We will never return to chaos. To be a citizen is to be human, and to be human is to be endowed with the fundamental right to pursue your own destiny.

(You can become a citizen.)

The Empress Eleanor made her first-ever visit to the Republic of Venice today. She arrived to attend a conference on the recent activities of the German Resistance Movement and the broader movement toward independence for occupied Germany. The conference would include representatives from Astro-Hungary, Poland, Macedonia, Venice, and Switzerland.

France is pointedly absent from the conference. The French Foreign Minister declared, "The only thing to be done with the GRM is to crush them. Any German caught advocating their line will be arrested, prosecuted, and hung from the Brandenburg Gate as an example for others. Countries supporting independence will be stripped of their friendship with France."

The Empress' personal press secretary, when asked for a response to the French Minister's comments had this to say: "Our shared heritage with France is deeper than friendship. We are family. With family you sometimes have to do things, say things, and take actions that another member of your family may not like, but which you know are in the best interests of that family member in the long-term. The occupation of Germany has been a dark blot on the history of the great French Nation for a long time now. We, the citizens of the Empire, the loyal subjects of the Empress, know what it is to live in a nation that has made mistakes. We know what it means to regret decisions that affect the lives of millions throughout history. We see a family member making the same decisions and we know from experience, maybe not today, maybe not tomorrow, but soon, that France will regret its actions and we seek to prevent that."

Fans of the Joe Show, rejoice! It looks like Empire Radio, a division of Empire Media, will be bringing back Joe Franklin, Portland's favorite snoop jock, for an all-new edition of the Joe Show. An unnamed spokesman disclosed last night that Franklin has signed a new contract and is expected back in the studio after a hiatus of more than a year.

A revamped format will feature live guests, a charming new co-host, and a Monday morning time slot, perfect for drive-time listeners. As always, Joe Franklin, the grandmaster of inconvenient questions, will be chasing down the city's best rumors, tall tales, urban myths, and other implausibilities.

Under The Ancient Suns Coming Soon! 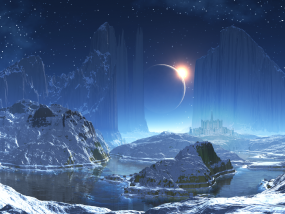 Empire Media has announced that its radio group will be debuting a radio series based upon C. R. R. Tefhulds' popular collection of short stories, Under the Ancient Suns.

Beatrice Eloise Marie, the executive officer of Empire Media, added this to the announcement: "I am personally a huge fan of these stories, and so I cannot tell you how excited I am to bring them to life for our listeners."

Listen to Empire Radio Here Below....